A member of the ESO Group, Erdemtaş Makine was founded in 2007 in Kocaeli with a focus on manufacturing machines and spare parts intended for the tire and rubber industry. It is today one of Turkey’s leading companies in the field.

Having specialized in the field of mechanical engineering, Erdemtaş Makine later achieved a stable level of growth and began producing turnkey production machinery together with its sister company ESO Endüstriyel Otomasyon, another member of the ESO Group. With its team of certified engineers, in addition to production line assembly, equipment maintenance, repair, revision and assembly services, the company is active in the fields of equipment production, planning machines as required, designing them in line with research and development, producing them, activating them in the field and providing after-sales services. With its approach that focuses on customer satisfaction and its motto, “We will either find a way leading to the solution, or make one,” Erdemdaş Makine produces first class solutions without compromising its work force or material quality, and delivers on time.

Erdemtaş Makine operates together with its sister company ESO Endüstriyel Otomasyon within the ESO Group, collaborating on turnkey factory assembly projects. While Erdemtaş Makine is responsible for machine design, production and mechanical installation of the system, ESO Endüstriyel Otomasyon undertakes the automation installation, electrical wiring and panel manufacturing of the system. The systems are delivered to the customers after the assembly works on the field are completed using the company’s own machinery, cranes and platforms and the systems become operational. Thanks to the strong spirit of cooperation and constructive rapport under the corporate roof of ESO Group, project owners enjoy the benefits of engaging with a single company to complete the entire processes on time, receive quality products and services, and reduce costs during turnkey factory assembly processes.

Accelerating its growth against the backdrop of its extensive know-how and experience, Erdemtaş Makine has launched various projects with its Solution Partner approach not only in the Turkish market, but also in African and European countries. We are concentrating our efforts on continuing our overseas expansion.

Located in a key position where the East meets the West, Erdemtaş Makine, as a determined leader in its field, will continue to deliver the best results on the strength of its strong mission statement, vision and values while prioritizing customer satisfaction, quality, safety and environmental issues.

As a customer-focused company respecting the rule of law, our goal is to constantly improve our excellent products and services. Among several of our priorities are timely completion of projects with minimum cost, the protection of the environment and the upholding of occupational health and safety procedures. Our company objectives are centered around creating value for our employees, the society as a whole and our shareholders.
.

Delivering maximum customer satisfaction as a dependable solution partner and making a difference in the industry by investing in the latest technologies to ensure high-quality services are delivered.

Erdemtaş Makine was founded in 2007 in Kocaeli, İzmit, with a view to becoming a solution partner for its customers in the area of manufacturing machinery and spare parts production intended for the tire and rubber industry.

Erdemtaş Makine is the second company within the ESO Group, whose industrial automation branch was established in 2005 with the brand ESO Endüstriyel Otomasyon. Redeploying its founder’s experience of 35 years in the tire industry into mainly the same industry, ESO Endüstriyel Otomasyon started offering its services in automation, electrics, mechanics and assembly within the ESO Group following the establishment of Erdemtaş Makine in 2007. Our unique business approach, which represents a crucial milestone in the industry in terms of the adoption of a holistic approach in the installation of mechanical as well as electrical and automation systems, is a second to none business model, offering efficient solutions for speedy completion of turnkey projects, which in turn gives us a strong competitive edge.

Having incorporated a design and research and development team of electrical, electronic and mechanical engineers into its ranks, Erdemtaş Makine built a new production facility that covers an area of 1600 m2. Capable of carefully analyzing customer needs and converting them into deliverables, designing and manufacturing products and commissioning the systems, our team of engineers works with a customer-oriented approach for the best results with the projects they carry out.

In 2010, Erdemtaş Makine was awarded the ISO 9001 Quality Management System certificate and the CE certificate as a testament to the compatibility of its manufacturing processes with European Standards.

Having achieved great success in the domestic markets, Erdemtaş Makine started its overseas expansion by dismantling the factories of global tire brands located abroad and seamlessly performing the installation and commissioning operations in Turkey.

Having gained a significant reputation in the process, Erdemtaş Makine, jointly with ESO Endüstriyel Otomasyon, undertook the turnkey factory assembly of a giant Japanese tire brand that had decided to invest in Turkey in 2014, which was another important milestone that opened up the turnkey factory assembly line for the company. Settlement areas were established in the provinces of Aksaray, Çankırı and Kırşehir for the teams working on the ongoing turnkey projects in Central Anatolia.

Taking its strength from its customer satisfaction-oriented approach, Erdemtaş Makine has taken quick but cautious steps towards growth, joining in 2016 a new factory project for a tire brand with investments across Turkey.

While continuing its overseas expansion with the complete disassembly of a factory belonging to a brand operating in Turkey and its assembly later in Turkey, Erdemtaş Makine also proceeds with its internal growth through its rapid strides to becoming more corporate. 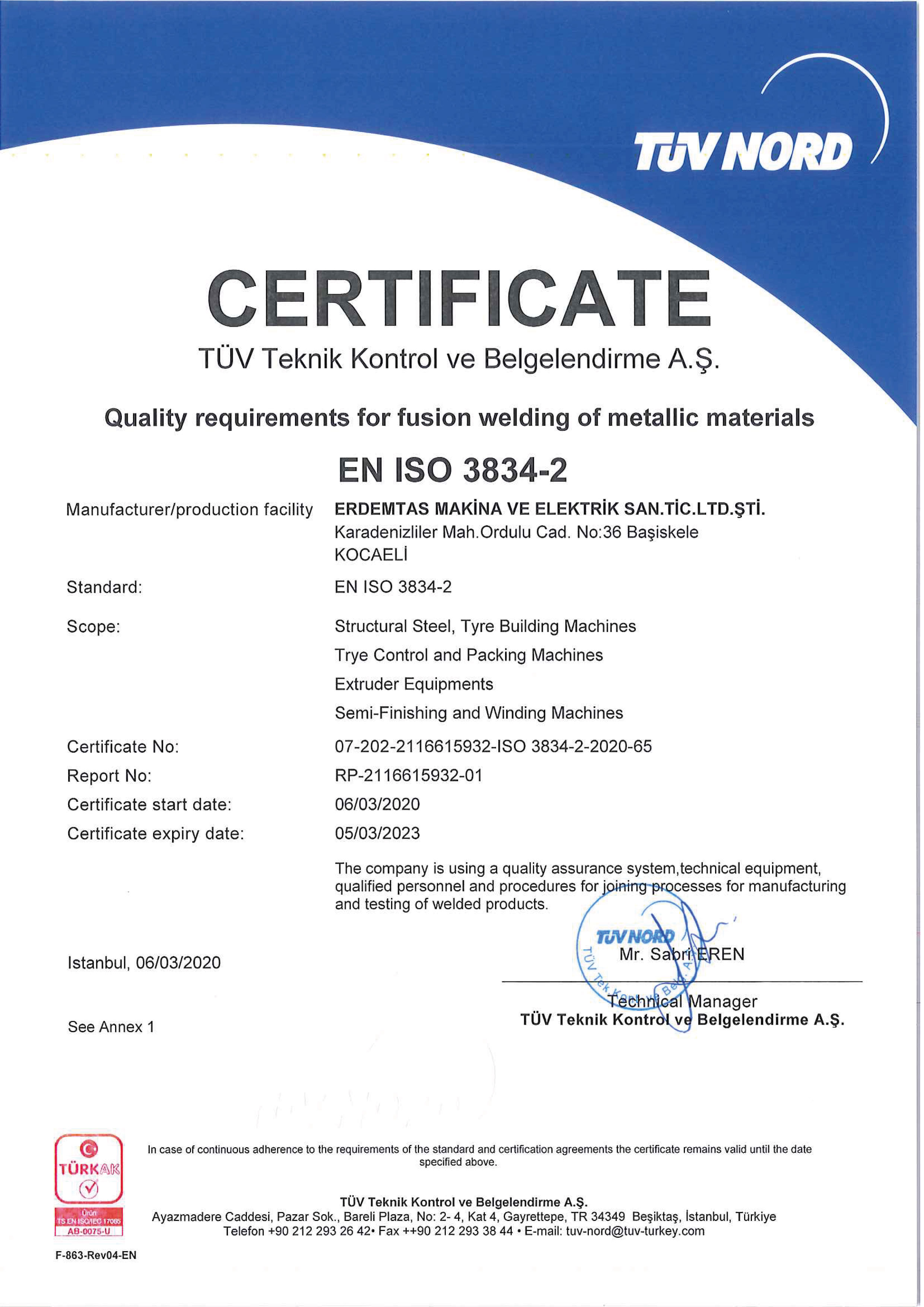 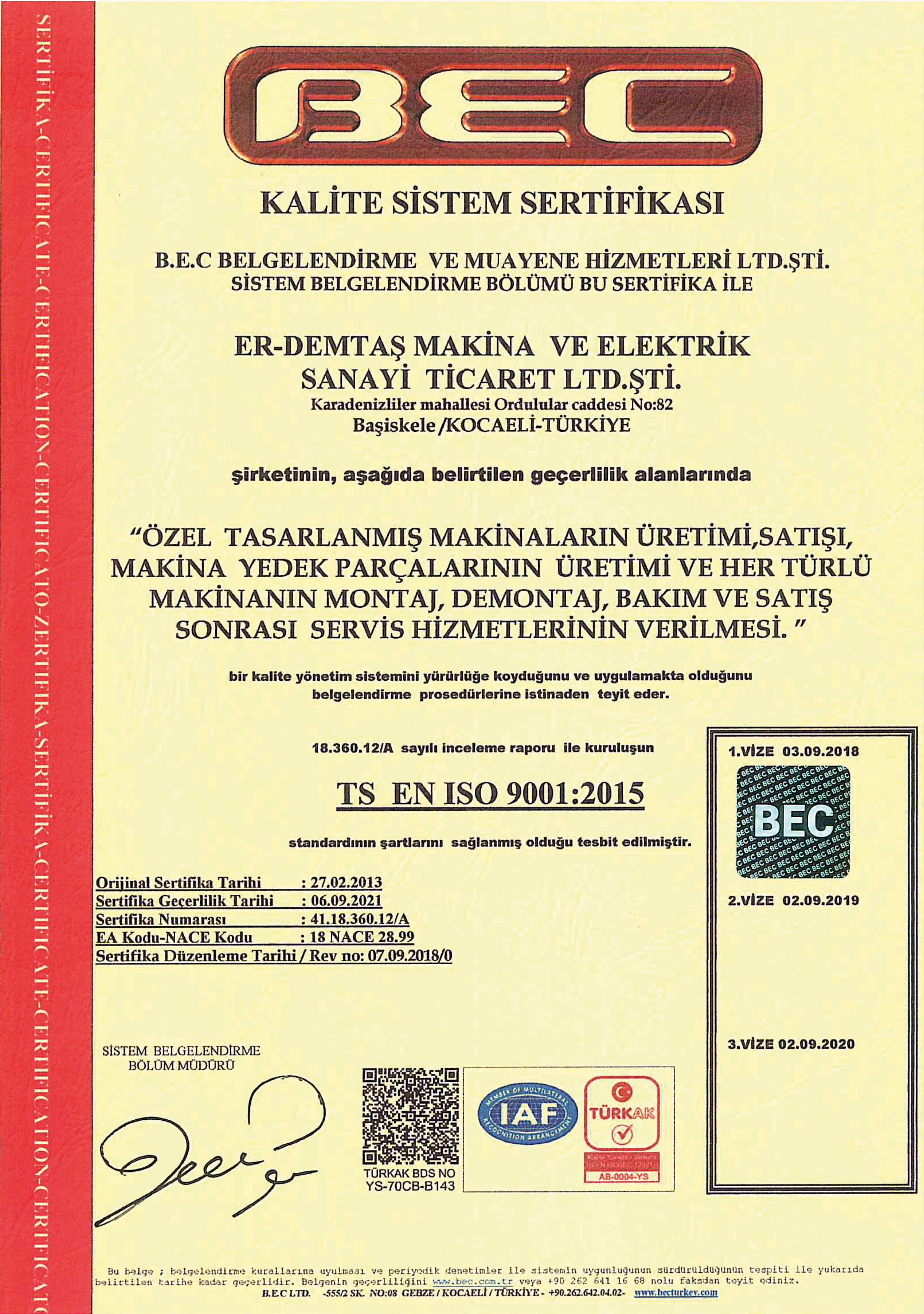 Erdemtaş Makine is one of Turkey’s leading companies in the production of vehicle tire manufacturing machines. The company is active in the fields of machinery and equipment manufacturing, turnkey machine and production line assembly, equipment maintenance and revisions, and turnkey factory assemblies. While continuing its activities, Erdemtaş Makine considers the following as inseparable elements of its Quality Policy:

Erdemtaş Makine operates a business model that cares about the environment and the health and safety of its employees. Accordingly, the company makes the following commitments: